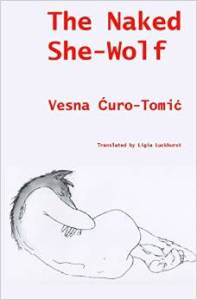 Translated by Ligia Luckhurst and published by Hade Publishing, “The Naked She-Wolf”, the second novel by Vesna Ćuro-Tomić, is now available in English on Amazon and Amazon Kindle.

To get the taste of the “She-Wolf”, here is how the book begins:

They say nothing happens by chance. Who knows what the wingbeat of that butterfly from Beijing brought you; only you didn’t recognise it when it came, nor did you know the turn your life would take from that moment on. What had brought on the events that happened here? Whatever happened, happened because it was inevitable that it should. The very fact that they did happen proves the inevitability of the events, as O. W. Grant, the Man Who Grants One Wish in the movie Interstate 60, said.

The young man in green hospital overalls rested the head of the stretcher against the leg of a chair in order to blow his cherry-red nose, already raw from a bad cold. His colleague, supporting the rear end, halted helpfully. Having dealt with the nose problem, the one with the cold applied both hands to the stretcher once more, smiling discreetly to apologise for the delay. Pale and motionless, the gathered people looked on as the two young men skilfully tilted, lifted and lowered the stretcher as they manoeuvred it between the tables and through the door. The body on the stretcher lay completely hidden under the white vinyl cover. Just as it was about to disappear through the door, its left hand slid from under the cover, swinging lifelessly to and fro as if waving goodbye.

Now you’d like to read on to find out what the hand did next… wouldn’t you?